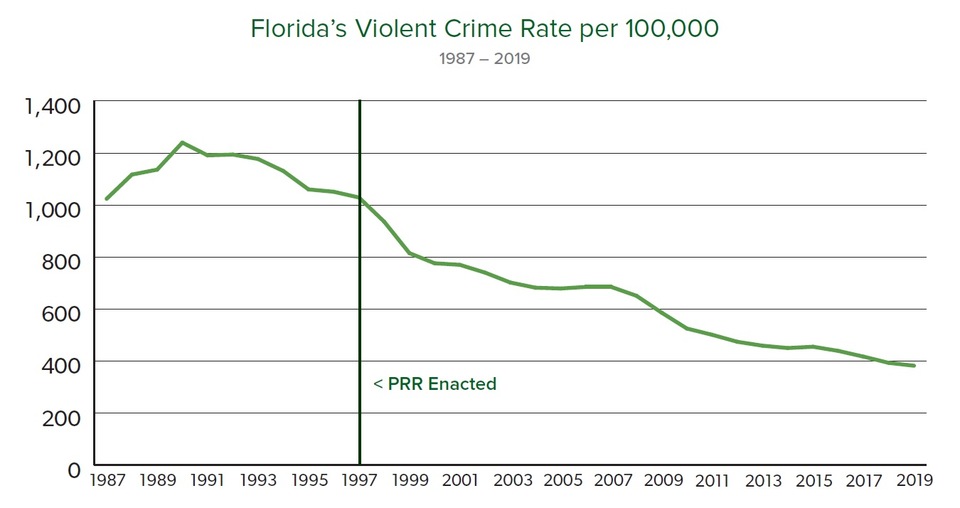 Florida Sheriff’s Association Research Institute has released a new study providing the facts regarding Florida’s Prisoner Release Reoffender law. The highlights of the study are below, or you can read the document here.

Florida’s rising crime rate prompted the Florida Legislature to address the issue of repeat offenders after crime reached an all-time high nationally and in Florida in the late 1980s and early 1990s. Judges had wide discretion in sentencing, which often resulted in lesser sentences for serious crimes and repeat, violent offenders. From 1987 to 1993, early release statutes resulted in the early release of over 200,000 inmates which reduced the average time served to only 34% of the originally imposed sentence.

Inmates sentenced to PRR are not first-time, low-level offenders. The sentencing provisions of PRR do not apply to less serious misdemeanors or infractions, even when committed repeatedly. In order to be sentenced under PRR, an individual must have previously committed one or more serious, felony crimes for which they served time in a state or federal prison or are on escape status. The offender must then commit or attempt to commit another felony within 3 years of their release from prison for the prior offense. If the offender commits a crime 3 years and 1 day after release, they would not be considered eligible for sentencing under PRR.

Most offenders are not sentenced to state prison until they have committed several serious or violent offenses. Many offenders are redirected to diversion courts or sentenced to probation for the first offense or sometimes even several offenses. Nationally, just 23% of all persons convicted of crimes are in prison. A recent national report indicated 83% of prisoners released from 30 state prisons were arrested for a new crime at least once during the nine years following their release. The 401,288 state prisoners released in 2005 were rearrested for almost 2 million crimes within 9 years, an average of 5 arrests per released prisoner. About 25% of released prisoners committed half of these crimes.

In Florida, the recidivism rate is about 25% within 3 years of a state prisoner’s release. Within 5 years that number jumps to about 35%. However, this analysis counts only prisoners who returned to prison and does not include those who were sentenced to county jail or other non-prison terms. Therefore, the actual recidivism rate in Florida is likely higher than the figure cited by Florida Department of Corrections (FDOC).

According to FDOC, there were 7,459 inmates (9% of all inmates) serving a PRR sentence in Florida’s prisons as of September 1, 2020. These offenders accounted for 14,765 crimes when sentenced as a PRR offender. The actual number of crimes committed by incarcerated PRR offenders is higher since this does not account for crimes committed before the PRR conviction. During FY 2018-2019, 64,396 offenders were sentenced to the Florida Depart­ment of Corrections (FDOC). Of those, just 148 (<1%) were sentenced as a PRR.

The FDOC has numerous programs to prepare inmates to re-enter society and reduce recidivism including academic, career and technical education, library services, and life skills programs. In FY2018-19, the state budget for these programs was $57.5 million. Unfortunately, less than 10% of inmates participate.